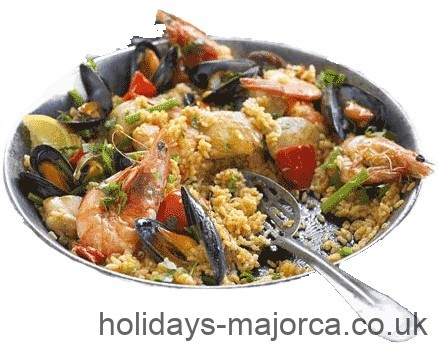 Originally ‘invented’ in the area around the Spanish city of Valencia on mainland Spain, this dish is nevertheless much in evidence in Majorca and can be found on most restaurant menus.

‘Paella’ refers to the large flat pan that the dish is cooked in (pronounced pie-ay-a) it can contain anything along with the rice, spices etc. and to be absolutely authentic it must be cooked over a wood fire.

However, the origin of Paella is thought to come from the servants of Moorish Kings mixing the leftover food from banquets in large pots which they then took home.

The word Paella is thought to originate from the Arab word for ‘leftovers’ which is ‘baqiyah’.

Our favourite Paella recipe is explained in this article.

What is contained in the Paella used to depend on where it was being made, for example away from the coast in country areas, you would find such ingredients as rabbit, pigeon or snails, whereas in coastal towns the emphasis would be more towards seafood – prawns, mussels, squid etc. and of course there is always a vegetarian option.

When you are dining today, however, you can have more or less what you want – seafood, game or mixed which has some of both.

Although paella can be eaten at any time, most Spanish people treat it as a lunchtime dish (except at festivals where there is usually a giant paella prepared in the town square).

Every chef has his or her own recipe for paella, and all think their method is best!

We have included the following recipe so you can make your own paella.

You can leave out any ingredients you don’t fancy or just use the veg. if you want.

There you have it, the perfect Paella recipe for any occasion!