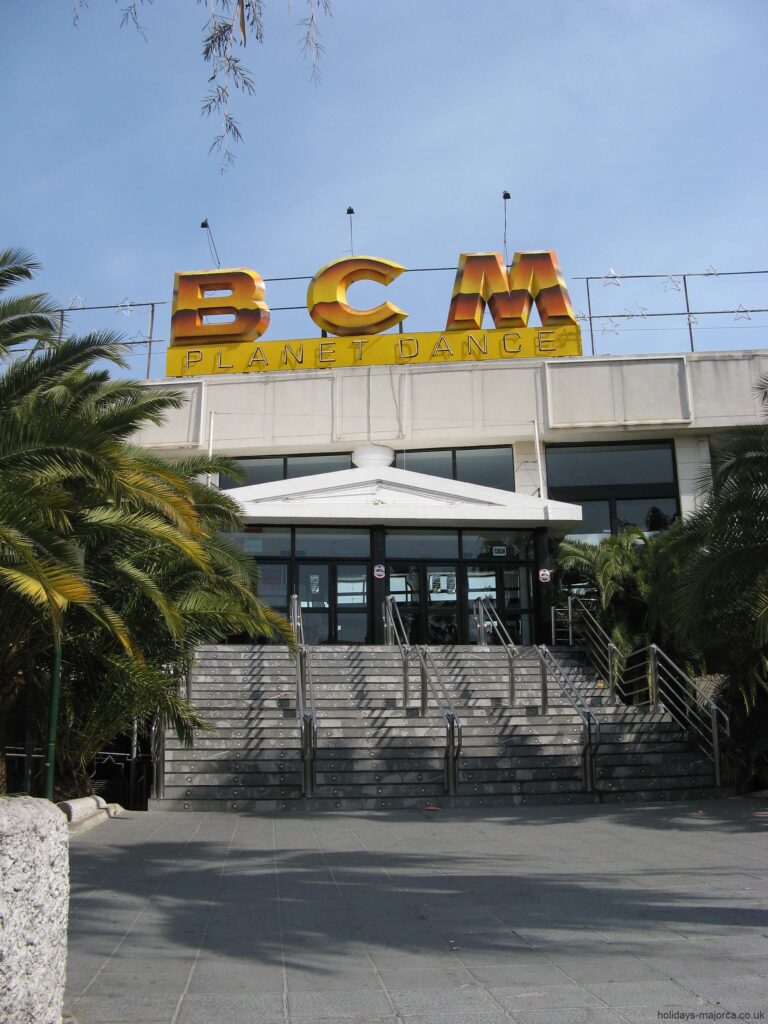 Located in the municipality of Calvia, Magaluf is one of Majorca’s big resorts, if not the biggest.

The resort of Palma Nova is right next door and it’s difficult to tell where one stops and the other starts.

Tourists are mainly from the UK with small pockets of other European’s to be found, mainly Irish, German and Swedish.

During peak season, Magaluf is definitely a resort for the younger generation (think Club 18-30).

Most holidaymakers spend the day lounging on the beach or around the hotel pool and then, later on, partying into the morning.

During peak season (June to mid-September) Magaluf is mainly occupied with the 18-30 crowd and young families, whilst in the off-peak months many of the bars and clubs are closed and the resort becomes a popular destination for the older generation seeking warmer winter climes.

Be warned, speaking from many experiences with the resort during peak season, no matter how much spending money you take, you will probably go through the lot!

The resort is well versed in the art of extracting money from tourists.

However, you’ll most likely have some great memories and possibly some new friends.

For the youth, the nightlife is Magaluf’s main attraction.

During the peak season partying goes on all day and it’s the norm to get back after a night out between 4 am and 7 am (possibly even later).

Also, you should be aware that a lot of the bars won’t get busy until around 23:00, as many people tend to go out later in the evening, especially as their holiday draws on and the effects of all the booze and late nights creep upon them!

If you’re on a tight budget, alcohol can be bought very cheaply in local shops & supermarkets and drunk in the apartment.

When you get to the bars, prices will be a bit more expensive, but no way near what you will pay in a UK pub.

In 2008, the local government of Calvia, Majorca banned any selling activity on the streets, this includes bar and club ‘street reps’ (the ones that tempt you into their bars with free drinks).

This activity is now illegal in Magaluf and any street touting may lead to the offender being dealt with by the local police.

Avoiding the bar reps used to be a nightmare for some, so this legislation may be a welcome change.

BCM Square and the Main Strip (Punta Ballena) are where the night action centres around.

There are a number of night clubs in the resort and a pass (the Magaluf Club Pass or MCP) can be bought that gives entry to many of them for a week or two.

The resorts biggest club, BCM, is famed for its foam/popcorn parties and laser shows.

It’s a great club, but don’t expect anything sophisticated like the Ibiza club scene here… yet.

Each year there are a number of guest appearances from famous DJ’s, who normally come along with the likes of Cream.

The club is actually split into two, one being BCMs and the other BCM Millennium, quite why I’m not sure, as the entry ticket gets you access to both.

Expect to pay up to €60 for one of the big nights (i.e. Cream) and around €30 upwards for any other night (it depends who and what is on).

There are well over 100 bars in Magaluf, so you won’t be hard-pressed to find somewhere to have a drink.

The main attractions in Magaluf are the sun, beach and water sports activities available.

The beach itself stretches out for over 1.5KM of fine golden sand.

Magaluf is not particularly known as a cultural hot spot and you will be hard-pressed to find any ‘old Majorca’ left.

If you’re interested in seeing a bit more, I’d advise hiring a car, moped or motorbike.

Unlike in the UK, you can drive on the motorways with a 125cc motorcycle in Spain.

Discounts are normally found for multiple-day bookings (i.e. 3 days) and you may get a discount for groups (i.e. 2 or more bikes/cars), it doesn’t hurt to ask.

Make sure you don’t forget your driving license.

If the hire prices are a little steep you can always opt for public transport.

The local bus system in Majorca is excellent and you can get a bus from Magaluf to Palma for less than €3, running every 30 minutes.

In addition, the number 50 bus is will take you around the sites of Palma and then back to Magaluf.