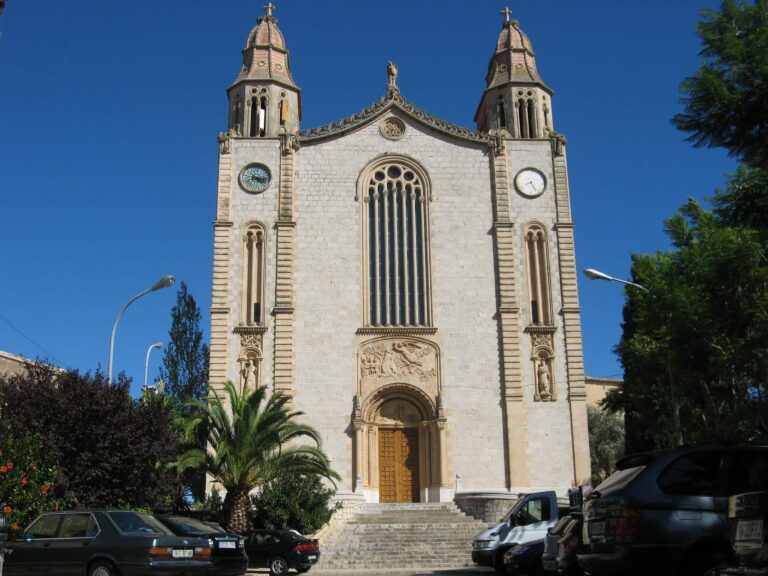 After Palma de Mallorca, Calvia is probably the wealthiest municipality (county) in Majorca.

The area accounts for a large proportion of Majorca’s tourist industry with the hugely popular resorts of Magaluf, Palma Nova, Santa Ponsa and Portals Nous to name a few.

The name of Calvià is believed to come from the Latin word “calvianum” which means ‘hot area’, which burns easily.

The parish of Sant Joan Baptista de Calvia appears documented for the first time in a Bull of Pope Innocent IV in 1248.

They made their living from crop and stock rearing agriculture.

The town is located on a small hill surrounding the Sant Joan Baptist Romanic Church with its neo-Gothic main window, built in the late 19th century around the 13th Century original one.

Calvià town is a quiet and traditional place to live, where you’ll never notice the busy resorts of the area, while you enjoy the olive, almond and carob trees that surround the town.

It is the administrative centre for the region, located 14 km from Palma, the capital of Majorca.

The town hall runs regular free Spanish courses for residents, due to the high number of foreigners living in the area.

The region started to be colonised by sailors who travelled the Mediterranean sea, building settlements near the coast.

In the 13th Century, during the Kingdom of James II, the Calvià town area started being populated.

The town grew around big old buildings surrounded by farmlands, windmills,… so a walk around the town is worth it just to enjoy the architecture.

The history of Calvià tells the legend of the Count of Trouble (Compte Mal) who comes out every year on the night of Saint John, from the Galatzó Mountain, riding its huge black horse covered in flames.

Every Monday a traditional craftwork market is organised in the town, at the foot of the church.

This market has over 60 stalls, including food, clothes, shoes, and handicrafts.

The festivities are from the 19th to the 26th of August for Saint James, patron saint of the town.

The modern period of Caliva Town is characterised by very low population density and insignificant population growth that continued well into the 20th century.

From 1960 onward, with the arrival of tourism, Calvia experienced the kind of economic growth it had never before seen.

Nowadays, the town if Calvia preserves many buildings representative of popular Majorcan architecture.

Many of the resorts in the area were developed during the ’60s and ’70s in an attempt to reap the benefits of the increasingly popular ‘package holiday’.

The developments worked and during the ’70s, ’80s, ’90s and even to this day, Magaluf and Palma Nova are synonymous with the phrase ‘package holiday’.

However, the area really is geared towards all types of tourists nowadays, from the bargain basement getaways in Magaluf and Palma Nova, to the multi-millionaire hideaways of Portals Nous.

A number of golf resorts and clubs have sprung up in the area too, giving evidence that Calvia, and Majorca in general, is not just a favourite destination for beach dwelling sun lovers.