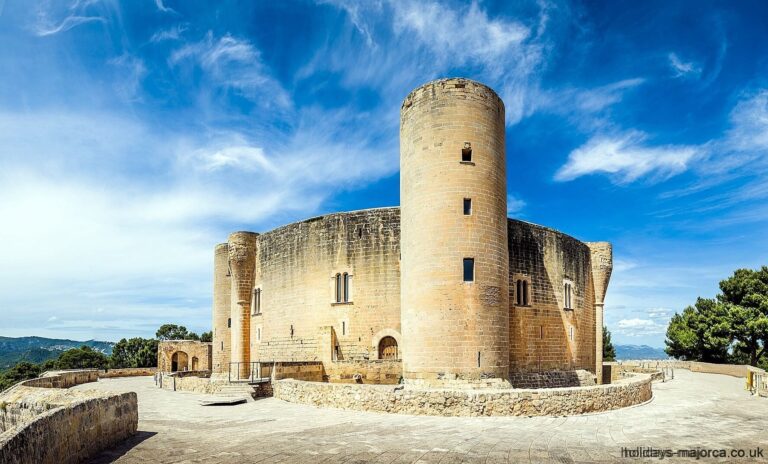 The Bellver Castle is of Gothic styling, dating from the early 14th century.

Built as a fortress and royal residence, Bellver Castle is a remarkable circular construction that offers an exciting journey through the history of Mallorca.

The castle is located about three kilometres from the centre of Palma de Majorca towards the southwest, upon a mount standing 112.6 meters above sea level.

It has panoramic views over Palma de Majorca bay, the Tramuntana mountain range and the central plane of Majorca.

The circular design with back-to-back circular towers seems to come from the Herodion hill in Palestine.

Their four towers follow the form of the wind rose.

The 3 smaller towers are back-to-back, with the 4th main keep/dungeon tower connected to the main structure by a high bridge over the surrounding moat.

This main tower is also referred to as the Tribute Tower.

Surrounding the castle and the keep tower are two moats.

To access the castle you will need to first cross a fixed bridge and shortly after that a drawbridge.

Of the four towers of the Castle of Bellver, the most famous is the Tribute Tower (Torre del Homenatje), that with a height of 33.37 meters lodges in its interior “S’Olla” (the Pot), a dark jail.

The circular inner yard has a water well located in the middle, which indicates that a cistern is located beneath.

The palace is built over two floors around the central yard.

All the ground floor rooms are accessed through the central yard by means of a gallery of Gothic arches.

On the first floor, you will find a gallery comprising 42 octagonal columns formed as ogival arches. A chapel dedicated to Saint-Marc is located on this floor, as is the Despuig Collection of Roman statues.

The main part of the Castle of Bellver was built by Pere Salvà, who also worked on the Palace of the Almudaina, between the years 1300 and 1311 for King Jaime II of Majorca.

Despite its rough exterior with the appearance of a defensive fortress surrounded by a moat, the castle had a palatial interior with the fine, elegant decoration one would expect of a royal residence.

The castle was constructed for residential purposes and King Jaime II, Sancho, Jaime III of Majorca and King Juan I lived there.

As fortification continued over the years, so too did different sieges, first in 1343, during the campaign to restore the kingdom from Majorca to the Aragon Crown, until the last one in 1521.

From the 14th century, the Castle of Bellver was made to serve as a prison for those in favour of king Jaime III, after his death in the battle of Lluchmayor (1349).

In the 19th century, during the Spanish War of Independence, the prisoners of the battle of Bailén were kept in the Castle, and later, political prisoners, such as Minister Gaspar Melchor de Jovellanos (1802-1808), who laid the foundations of Mexican agrarian land laws, based on the works of Adam Smith’s ‘The Wealth of Nations’.

After the 1936 violent uprising, known as the Battle of Majorca or Majorca Landings, 800 republican political prisoners were locked away in Bellver Castle, during their incarceration they were forced to construct the present access road to the castle.

Among those prisoners were Alexandre Jaume, who had secured the cession of the castle to the city by the Second Republic, and Emili Darder, town major at the time of the succession.

They were both executed by firing squad shortly after their imprisonment.

The Second Spanish Republic yielded the castle to the city of Palma de Majorca in 1931, along with the forest that surrounds it.

Afterwards, it fell under the protection of the generic Declaration of the Decree of 22 of April of 1949, and Law 16/1985 of the Spanish Historical Patrimony.

In 1976 the castle became the Museum of History for Palma de Majorca, exhibiting artefacts dating from Majorca’s first settlers up to the Middle Ages.

At the moment it is being renewed with exhibits depicting modern history.

This exhibition has many pieces coming from archaeological excavations and municipal collections of art; also containing a collection of classic sculptures of Cardinal Despuig.

Thanks to the road and parking constructed by the political prisoners, at the moment the castle receives a great number of visitors each year.

Current Use Of The Castle

Nowadays the courtyard plays host to a great variety of political acts, cultural concerts and social performances. As well as:

Bellver Castle’s close proximity to Palma de Majorca combined with its visibility from both the sea & many areas in the city, have turned it into one of the symbols of the Palma de Majorca.

On the second Sunday of Easter, known as the day of the Angel Guard, the people of Palma de Majorca join in the forest of Bellver for the celebration of the Angel Sunday.

What To See In Bellver Castle

The emblematic castle has an unusual appearance thanks to its circular ground plan surrounded by semicircular towers. Inside, semicircular arches and ribbed vaults provide a Gothic and medieval-style setting in which it is easy to imagine grand events and pompous royal celebrations.

From the central parade ground, you have access to the different rooms where the equipment was stored and where the service personnel were housed, while those on the upper floor were dedicated to the rooms of the royal family.

Unfortunately, the current state of the rooms is very different from their original state, as no pieces of the original furniture have been preserved and traces of the old colours that once decorated the noble rooms have disappeared with the passage of time.

The best part of the castle is on the upper terrace, from where you can enjoy unequalled views of the bay of Palma and the dense pine forest that surrounds the fortification.

How Do I Get Go Bellver Castle?

Bellver Castle is one of the main places to see in Mallorca and is well worth a visit.

If we compare it with its neighbour, the Castle of San Carlos we find two very different fortifications & it would be difficult to choose between them, but fortunately it is not necessary as both are interesting in their style.

From October to March:

From April to September: 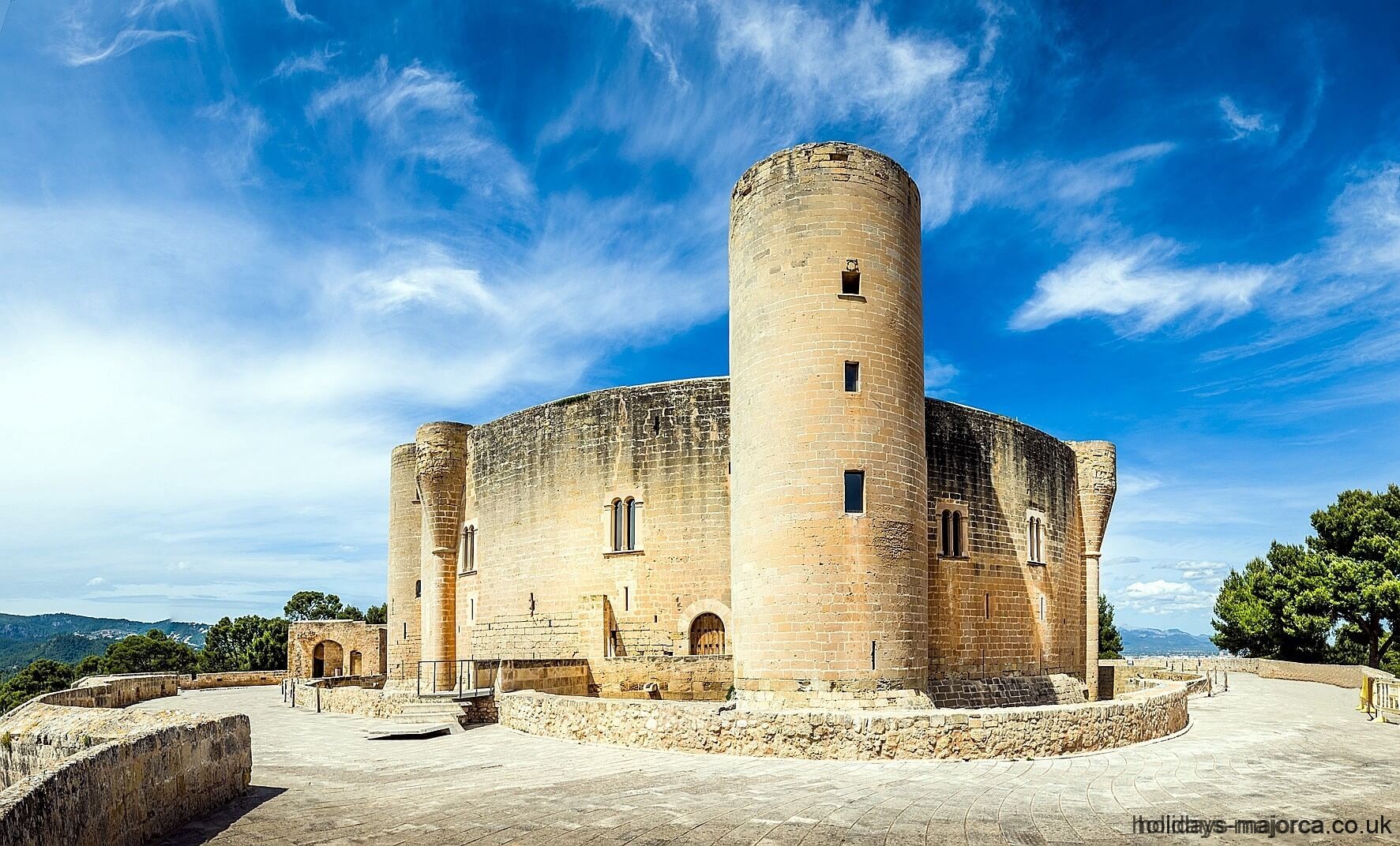