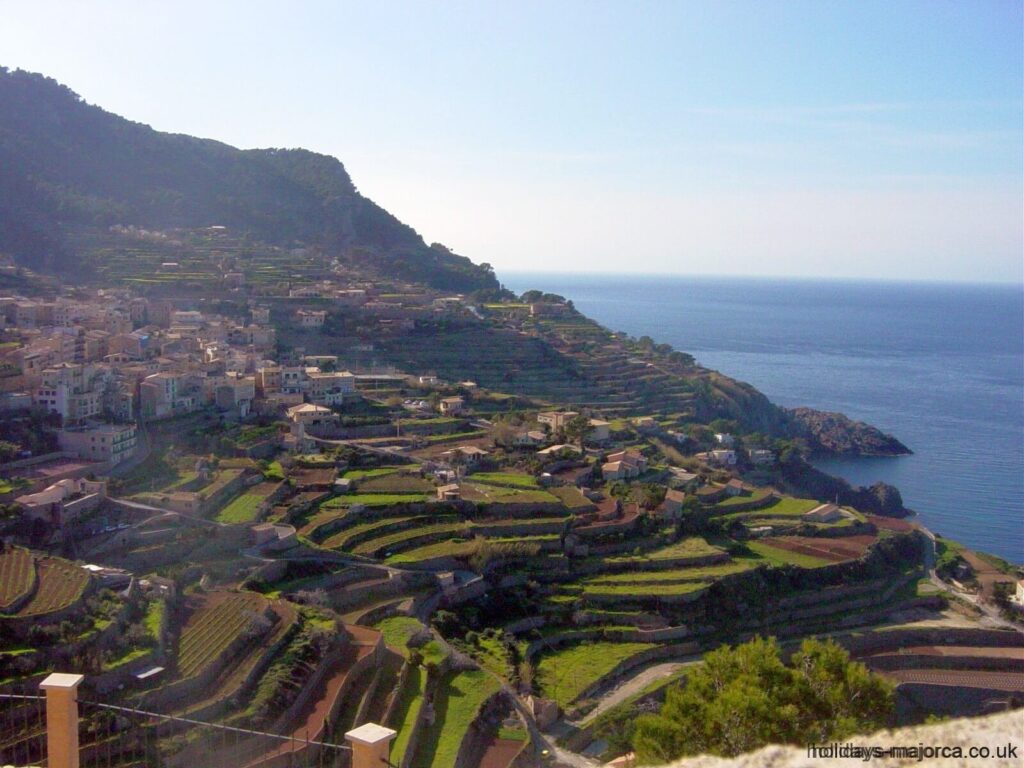 Antiquity knew of Seven Wonders of the World, whether for the very size of buildings and monuments constructed by human hand, or because, like the Colossus of Rhodes, they seemed to defy the known laws of physics, or because nature and artifice had been blended in an astonishing and harmonious fashion.

The Hanging Gardens of the Assyrian queen Semiramis in Babylon, if she existed, achieved a miracle of the latter kind, and the sight of the terraced gardens at Banyalbufar is reminiscent of it.

Undoubtedly their creator deserves the greatest of admiration. In the case of the Babylonian gardens, there was at cast a named builder, if mythical, which is more than can be said for Banyalbufar.

For a long time, the official version was that the gardens were solely the product of the hand of Moors expert in landscape architecture.

A new interpretation, according to which the original rock-slinging inhabitants began to clear the gentle slopes, came into fashion in the last decades of the 20th century in a renewed search for a Majorcan identity and new Majorcan national consciousness.

Still, other sources consider it possible that the Phoenicians saw yet another opportunity here and used it to boost their flourishing Mediterranean trade.

Certainly, it was the Moors who perfected everything they found here during their 300 year rule.

They were also the ones to name the place and its garden: bany el buhar means the “vineyard by the sea”.

As the Prophet forbade Muslims wine, they did not drink it.

However, cultivate it they certainly did, of that, there is no doubt.

In fact, the wine was made here from Moorish times until the late 19th-century collapse of the Majorcan wine industry, mainly from the malvasia grape, which produces a sweet, scented dessert wine that sold like hotcakes all over Europe in its day.

A banquet or grand dinner party was unthinkable without a glass of malmsey from the Canary Islands or Banyalbufar.

Shakespeare’s Falstaff praises this splendid wine, and contemporary writers reported that the Duke of Clarence, drowned in a “butt of malmsey” in 1478, in the Tower of London.

Archduke Ludwig Salvator also extolled the wine for its savour and health-giving benefits, but perhaps His Grace S’Arxiduc was not unprejudiced in this.

His lover Catalina Homar was in charge of the vineyard on his estate and won a gold medal at the Paris Exposition with her malmsey.

It is said that Majorca even owes its reconquest to malmsey, at least in part.

The wine from the seaside terraces was supposed to have been one of Jaume I’s main reasons for recapturing the island.

At any rate, Banyalbufar malmsey thereafter became a favourite wine at the court of the kings of Aragón.

The Drystone Walls of Banyalbufar

The Moors first made the best of the protected position of Banyalbufar, in a cleft in the cliffs with a gentle incline to the sea, by inserting level areas, the terraces, in the slopes.

The stones and topsoil gathered thereby were reused elsewhere on the slope – the stones to build dry stone walls below each field that supported the precious earth and checked the flow of water downwards.

These parcels of land are crisscrossed with ditches, conduits and channels, not to mention rectangular and round underground cisterns that get their water from the caves of Puig Planicia.

The water runs on the overflow principle from the source cistern into the first field, whence it is distributed along branches through the plantations, if possible without evaporation losses, then runs together again at the lower end of the field before running over into the next field below.

At the end of the road, the water reaches the village, where it feeds the overflow from the fields into wells and underground cisterns.

Though it may all look like child’s play, in fact, powerful forces of nature are at work here, and the system only works as long as the stone walls are kept continuously in good shape.

In the 20th century, some farmers have tried using blocs (industrially made cavity blocks) instead of labour-intensive drystone walling, but it did not work.

The blocks crack under the pressure of the water and earth more quickly than the traditional drystone walls, which are in themselves elastic.

In the 19th century, whole vineyards were abandoned, both in Pla and Banyalbufar. It is only now that the recultivation of the slopes for malmsey is slowly underway again.

When the vineyards in Banyalbufar had stopped producing – except for some malmsey for domestic use – the big landowners had to sell large tracts of the 2,000 or so terrace gardens to landless peasants, who since then have grown mainly tomatoes and potatoes here and thus ensured that the “hanging gardens” of Majorca remain part of the landscape.

They are not much disturbed in their work.

The tourist routes are concentrated on Deià and Valldemossa a little further up the coast, mostly passing Banyalbufar and the nearby Estellencs without a second glance.

Only the Mirador de Ses Animes, the Watchtower of the Souls outside Banyalbufar, attracts their interest, as it provides one of the most splendid views over the Tramuntana love affair of mountain and sea.

So the village has remained a village.

Although the day has long passed when all inhabitants lived only from fishing and working the land, the island’s new wealth – tourism – has been doled out only in small portions.

Here it is mainly Majorcans who seek quiet and seclusion, which few places on their island offer any more.

Banyalbufar has nothing to hide and little to show off.

A great house has survived from the days of the large landowners, the Baronia, whence the valley was ruled up to the 15th century almost absolutely – the entire population of the place was subject to the civil and penal jurisdiction of the lords of the Baronia.

The closely packed stone houses of the place do however feature some fine semi-circular arched doorways, while village life is centred on the old-established cafés like the Marisol, which has adopted Banyalbufar’s leitmotif and seems to hover over the sea on one.

The very fact that the place has “little to offer” means that it demonstrates the interdependency of nature, commerce and agriculture. 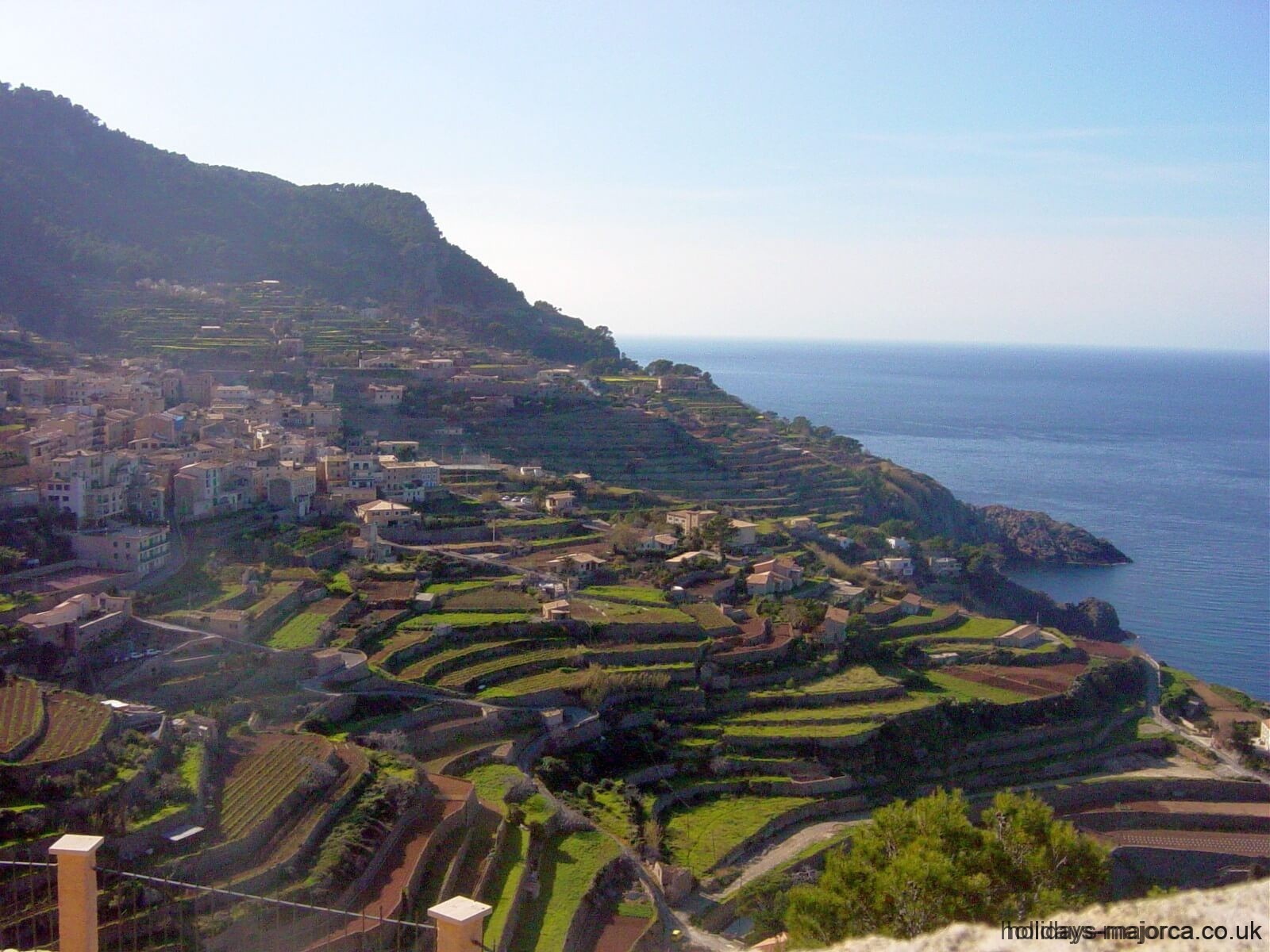