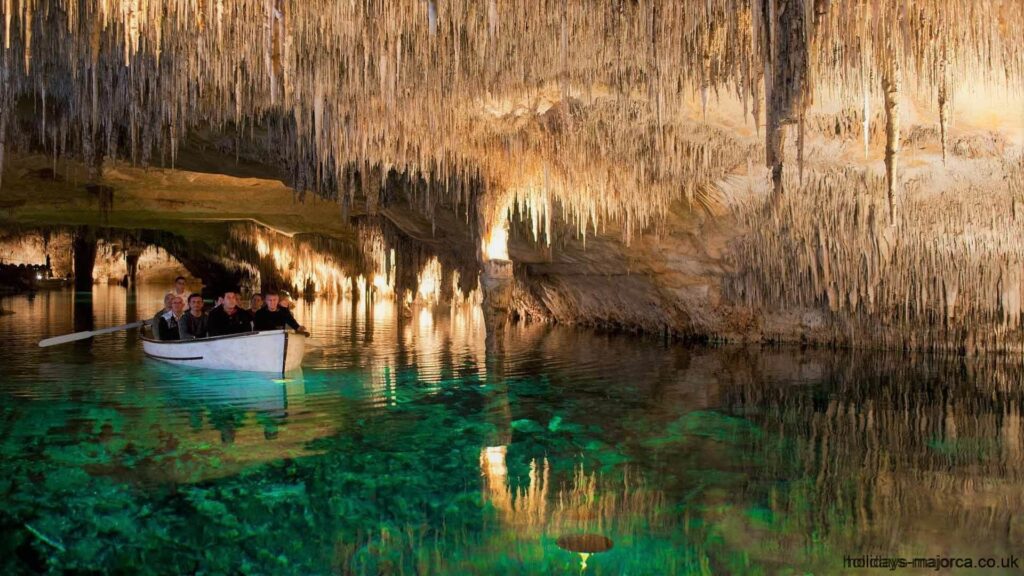 The Caves of Drach (Coves del Drac – The Dragon Caves) are located about half a mile out of Portocristo and are well worth a visit.

Patiently formed as a beautiful whim of nature that extends up to 25 metres deep, the Drach Caves of Mallorca are a true spectacle of stalactites and stalagmites that hover above beautifully illuminated underground lakes.

They have been known for about 300 years and in 1339 the Governor of Majorca sent men down into the blackness of the caves – their mission was to locate the missing treasure of the Knights Templar which was said to have been secreted down in the caverns of the Caves of Drach after vanishing when the Order was suppressed.

It is not actually known if they were successful in finding anything, however.

Pirates were supposed to keep their ‘goods’ in the cavern, to be guarded by the dragon, hence the name Dragon Caves, but neither they nor any other inhabitant ventured much further than 200 yards into the caves – this is as far as you can go without losing sight of the entrance.

In 1878 a group of Catalans went into the caves and after they had not emerged for three days were given up for dead.

They re-surfaced after this time frightened but unscathed and told of the wondrous sights that had been seen below, however they could not tell where or how far they had gone within the Coves del Drac system.

It was as late as 1896 when a Frenchman, Edouard – Alfred Martel made the first serious study of the cave system mapping it thoroughly.

Deep in the caves, he found a lake of crystal clear water whose temperature stays at a constant 20 degrees centigrade.

Martel also found a message on the cave wall left by the lost Catalans ‘No hi ha esperanca’ – there is no hope any more.

Opening the Caves of Drach

A Majorcan named Joan Servera bought the area around the caves as well as the cave entrance (the law of the time meant that if one owned a cave entrance, one also owned the cave as far as it went underground!) as he had the idea he could ‘do something with it’.

Private shows of music and ballet were given inside the caves from about 1931 and in 1935 Servera had the caves illuminated with coloured lights to create a fairy grotto effect.

The caves are much the same today and you enter the cavern and walk down various steps and paths – always going downwards – you will be able to see the artistically lit stalactites and stalagmites that look as though they have been built like that instead of being formed over millions of years by the dripping of the mineral-laden water.

Don’t be tempted to take any photographs in the Caves of Drach though as it is forbidden and Rangers are stationed every 50 metres or so strictly enforcing the ban!

With a route of more than 1,000 metres through the majestic Caves of Drach we find different rooms of varying sizes in which stalactites and stalagmites loom in a wild & disorderly way to create impossible shapes.

The varied natural formations of the caves offer a special panorama, ideal for giving free rein to the imagination of visitors.

Despite the cold and damp atmosphere underground, the caves are so pleasantly illuminated that they offer visitors a warm embrace, enveloping them in their endless tentacles of water and lime.

Crossing the numerous rooms of the Caves of Drach we come across various lakes in which the different rock formations are shown in duplicate as they meet their reflection.

At the end of the tour, when the visit seems to be coming to an end, is when the highlight of the visit arrives.

Once you have completed the ‘descent’, you will come to a massive natural theatre where rows and rows of benches are provided overlooking the lake.

Occupying the steps of a damp theatre with the most unusual decorations, it is possible to enjoy a surprising classical music concert in which the musicians move slowly across the lake onboard small boats.

When everyone is seated, the lights go off and you will experience absolute darkness.

The announcer will then tell the audience a little about the ‘Coves del Drac’ in a few languages including English of course.

The concert takes place in a dome that serves as an amphitheatre, a space that offers magnificent acoustics while facing a very special stage, Lake Martel.

More than 100 metres long and 30 metres wide, it is one of the longest underground lakes in the world & is located at sea level, at a depth of 27 metres.

Then you will hear music coming from the lake as several lit-up boats slowly come into view one with the musicians on board.

Be in no doubt that the music you will be hearing is absolutely live and not recorded!

The boats slowly traverse the lake and then turn round to retrace their passage and eventually go out of sight, the music fading as you lose sight of the boats – it is quite a magical and moving experience.

When the lights come up again, you can either make your way out of the caves by the nearby exit on foot, or you can queue up near the lake & have a short boat ride to the way out.

Taking the boat option, it is possible to cross the lake in to enjoy the visit to the Drach Caves in all their splendour, ending the tour in contact with one of the most important elements of the cave, the water.

All this is included in your entry fee to the caves.

The trip down the ‘Caves of Drach’ or ‘Dragon Caves’ has remained more or less the same for decades and the caves are open most days throughout the year.

The Caves of Drach are one of the main tourist attractions in Mallorca & a visit to them is highly recommended, especially for those who have not had the chance to visit any other caves.

Unfortunately, as one of the most visited places on the island, the experience is somewhat tarnished by the large number of visitors, which does not allow you to enjoy the visit as it deserves.

If you visit this part of Majorca you must go and see them!