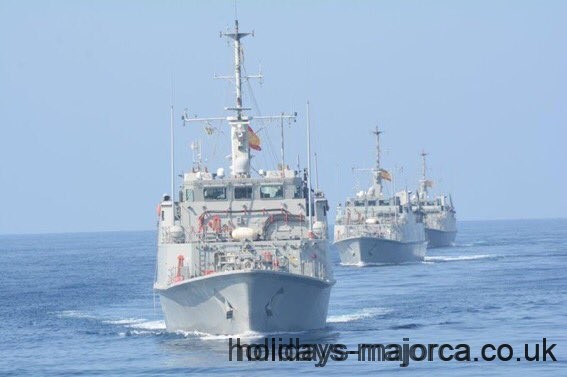 The Air Rescue Service (SAR) of the Spanish Air Force now directs the rescue operation for the vanished firefighting plane, coordinated through the national emergency service (112).

In addition, the Bombers de Mallorca (Firefighters of Mallorca), IBANAT (Balearic Institute of Nature), Civil Guard and Navy are also involved in the search.

The Navy is moving two mine hunting ships to Mallorca to help in the search for the missing fire spotting plane.

The operation of rescue the Air Tractor 802, called Red, and its pilot Antonio Alfaro has resumed early this morning.

Numerous troops have been mobilised by land, sea and air in search of the missing plane under the direction of the Air Rescue Service (SAR) of the Air Force and the emergency service coordination – 112.

The special ships are focusing their attention on the coastline area part of the northern Serra de Tramuntana mountain range.

During last night, a SAR plane, equipped with the night vision device has continued the search for any trace of the missing aircraft.

With the arrival of daylight, the numbers involved has once again multiplied with air, sea and land forces now combing the island in search of some indication of the pilot of the Balearic Institute of Nature (Ibanat).

Helicopters of the SAR, Ibanat and Guardia Civil have focused on the northern part of the Serra de Tramuntana mountain range. Members of the Mountain Groups of Majorca Firefighters, from the stations of Inca and Sóller, have this morning crossed Ternelles, Ariant and Mortitx.

In the face of the growing possibility that the aircraft could have crashed into the sea, the Spanish Navy yesterday moved the mine hunters ‘Tajo’ and ‘Tambre’ to probe for any trace of the airplane.

If the plane was submerged in the northern part of the island, it could be found at great depth. If this is the case it would make it very difficult to locate the Air Tractor craft. For this reason, the participation of these vessels, equipped with sonar and radar, will be crucial. For its part, Salvamento Marítimo has mobilised the Salvamar Saiph ship and the helicopter Helimer 218.

The missing aircraft is an Air Tractor 802, with registration EC-GVN, piloted by Antonio Alfaro, 46, which took off on Tuesday 12/06/18 at 17.23 hours from the Son Bonet airfield on a reconnaissance mission checking the Serra de Tramuntana mountains in Majorca for fires.

His flight plan was scheduled for between 17.30 and 18.30. At about 18:00 the aircraft was contacted in Valldemossa, but at 18.08 contact was lost when flying over Cala Sant Vicenç. Navigation conditions were optimal, with good visibility, however a fairly strong mountain wind was blowing.

Antonio Alfaro is a very experienced pilot in the fight against forest fires.

He has 1,320 flight hours to his credit, gained from flying operations both in Spain & Chile. The Air Tractor 802, with registration EC-GVN, is about 20 years old.

However, his colleagues consider it an excellent aircraft. To the point that they nicknamed it the “Millennium Falcon”.