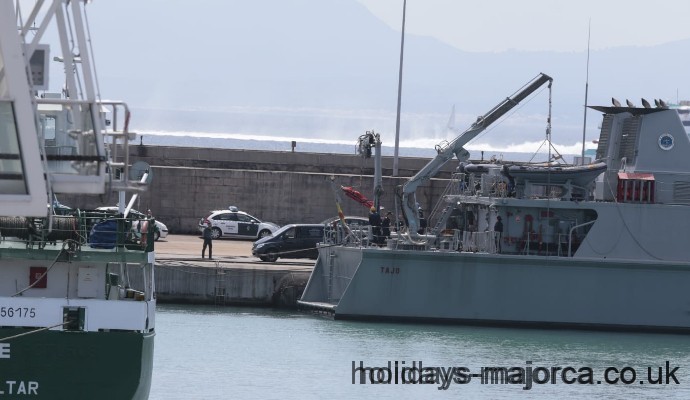 The Spanish Navy mine hunter ‘Tajo’ docked at noon on Sunday 17-06-18 with the lifeless body of pilot Antonio Alfaro, after specialists from the Spanish Navy ship ‘Neptuno’ recovered his body from a depth of 62 metres below the Mediterranean sea.

The lifeless body of the pilot Antonio Alfaro has arrived in Port d’Alcudia, Majorca.

The Spanish Navy mine hunting ship – ‘Tajo’, whose sonar located the plane last Friday with its sole crewman, who died inside, 62 meters deep at a location two miles off the coast of Pollensa, in front of Cala Romagueral, has been responsible for moving the body to land.

The ship entered the bay of Alcudia about 11:30 in the morning and, at twelve noon was docked at the port.

Once on land, the agents of the Judicial Police of the Civil Guard and a forensic doctor examined the victim and initiated their investigations, as they usually do in cases of deaths found at sea.

On Monday an autopsy was performed on the body of Antonio Alfaro, an experienced 46 year old pilot who disappeared on Tuesday afternoon when he was flying over the Serra de Tramuntana mountain range, very close to Cala Sant Vicenc, in the Ibanat Air Tractor 802 firefighting plane during a routine reconnaissance flight.

The forensic examination could shed more light on what happened to the aviator and determine the cause of his death.

Navy divers from the rescue ship ‘Neptuno’, deployed to Majorca from Cartagena (Murcia), managed to recover the body from a depth of 62 meters with the recovery operation starting at 07:00 on Sunday 17th June, 2018.

Work has now begun on refloating the sunken aircraft in the waters off Pollensa.

The Spanish Navy specialists have inspected the seabed, where the plane is submerged, and are evaluating their options to recover the aircraft as soon as possible.

The Air Tractor is practically intact 62 meters below the surface, which suggests that the pilot tried to perform an emergency splashdown after suffering a setback mid-flight last Tuesday afternoon.

The last contact with the aircraft was made at 18:08 in the vicinity of Cala Sant Vicenc. Contact with the pilot’s mobile phone was also lost at that time.

Now, the investigation will focus on determining what the setback was that the aircraft suffered mid-flight and why the radio beacon did not work, a device that is activated in case of impact, or when it comes into contact with water in order to transmit its location.

The death of Antonio Alfaro has caused great dismay both in Mallorca, where he worked, and in Moguer (Huelva), where he was born. Condolences have spread throughout Spain.

Article Name
Body of Air Tractor pilot arrives at Port d'Alcudia after being recovered in waters of Pollensa
Description
The Spanish Navy mine hunter 'Tajo' docked at noon on Sunday 17-06-18 with the lifeless body of pilot Antonio Alfaro, after specialists from the Spanish Navy ship 'Neptuno' recovered his body from a depth of 62 metres below the Mediterranean sea.
Author
holidays-majorca.co.uk
Publisher Name
https://holidays-majorca.co.uk
Publisher Logo